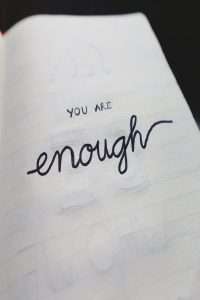 I struggle with feeling inadequate…

as a mom, as a wife, as a daughter, as a grandmother, as a coworker, as friend. Try as I might to get and keep it all together, I still end up asking myself, “Am I enough?” If I asked you to make a list of things you thought were “wrong” with you, what would your list look like? When I think about the things that make up “me”, there are flaws that I see immediately:

Are all of these actually flaws? No, not really but some of them surely are. If I need to control everything, am I leaving room for the Lord to work? Doesn’t my need to control, reveal a lack of faith? If I had faith in God’s control, I wouldn’t need to control. Is having an opinion on almost everything a flaw? Not unless I don’t have the self confidence and discipline to be alone in one because there will be times when we have different opinions with others. How do I know if it is a flaw, just something I need to be aware of or is completely normal as human?

Recognize the fine line between a healthy self discipline and listening to the voice of a liar.

Satan will tell us all day long that we are not enough. You’ve heard that voice. “What makes you think you can do that?  You aren’t smart enough or you aren’t pretty enough.  Good mothers stay at home with their children. Any really good woman can balance work and a family.  They like someone else more. Her family has it more together than yours does – her house is always clean, her kids don’t wear hand-me-downs and she makes homemade biscuits. They have more money.” Ok, that last one about the money may not be a lie, but it is a lie that having the most money matters in the end.

How do you know for sure if it is the voice of the liar or conviction?

First, you have to spend time talking to the Lord.

When my son, Joshua, was little and we had a landline phone, he picked it up, dialed some random numbers and started talking. I asked him who he was talking to and he said, “My Nonnie”. Nonnie was his grandmother. I argued with him that he wasn’t and he argued back. Finally, I asked him what she said. He looked at me and said, “Your call cannot be “apwheated” (completed) as dialed.” He had gotten a recorded operator message and to him, it sounded like her. If he had spent time talking to her on the phone, he might have recognized that the voice wasn’t hers.

According to John 10:27, “My sheep hear my voice, and I know them, and they follow me.” The word “hear” in this instance, has the connotation of not only hearing the sound, but of learning – “to get by hearing”.  That learning, comes by spending time in the Word.

Second, ask yourself, “Is what the voice is telling me consistent with the character of God or the devil? What is its purpose?”.

Micah 6:8 says “He has shown you, O mortal, what is good. And what does the Lord require of you? To act justly and to love mercy and to walk humbly with your God.” Does listening to a voice that says “you aren’t good enough?” apply to any of those? In case you are thinking, “It says act humbly and I don’t want to be prideful.”  It isn’t being proud to say I am good enough. Pride is thinking  you are good enough because you are you. Pride is not recognizing that if it were not for God’s grace and the blood of Jesus, you would be in just as bad a condition as the worst of the worst. Truth and humility are found in knowing that you are good enough because of the gifts God has given you. They are found in knowing that you have read God’s word and applied it to your life.

By contrast, in John 10:10 Jesus said, “The thief comes only to steal and kill and destroy; I have come that they may have life, and have it to the full.” Doesn’t believing you aren’t good enough steal your joy? How many people have been destroyed by depression, some to the point of killing themselves because they believed they weren’t enough?

Remind yourself, daily if necessary, that you will only have to answer for you. Colossians 3:23-24 reminds us “Whatever you do, work at it with all your heart, as working for the Lord, not for human masters, since you know that you will receive an inheritance from the Lord as a reward. It is the Lord Christ you are serving.”

That means we should take our responsibilities seriously, do our best and ask the Lord to help us, but that is really all you can do. Comparing your life to someone else’s is a recipe for disaster because you risk becoming prideful on the one hand and/or resentful on the other. The Lord will never ask me what I think about how you are living or have lived your life and He will never ask you for your thoughts on mine. The first time I read that, it gave me tremendous freedom!

In addition, Psalm 139:13-14 says “For you created my inmost being; you knit me together in my mother’s womb. I praise you because I am fearfully and wonderfully made; your works are wonderful, I know that full well.” Did you catch that? I “fearfully and wonderfully made”. When the Lord made me, it was an intentional creation and rather than throwing everything in a pot, He measured all the ingredients with care and gave each part and aspect of my personality some thought – and He did that when He made you, too! 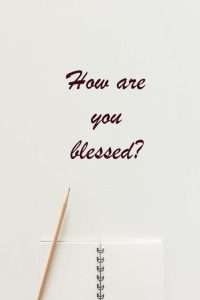 Spend a few minutes in God’s word today. Make a list of just a few things that He has blessed you with today. Remind yourself that someone loved you enough to die for you and that there is a plan for your life. If there are areas of your life and personality that you know really could use a little work, ask God to reveal them to you and to help you with them.

Be blessed. Know your worth. Share love and kindness.